Everybody who loves summer, clap your hands!

Can you hear the pounding echo of joyous palm-smacking up the canyon walls? School is out, the weather has turned warm, and June gloom has been reduced to a touch of early morning grey.

Beach days ahead. There should be a sign on the outside of town that reads just that. 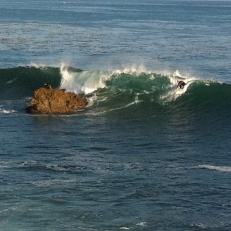 As if to celebrate the solstice and change of season, the wave machine cranked up a couple of nice southerlies that plied the southern California coastline with some decent overhead sets.

Rockpile was screaming with breaks on the outer reef that made me wish I was 16 and rock solid. The “kids” were wild with acrobatics on crashing giants. Brooks cranked up a stack of hollow overhead lefts and Thalia was just sweet. San Onofre drove a few freight trains right through to the beach. I watched burly men give up on the paddle out. It was ferocious, and to use an old term, righteous.

OK, there’s traffic. Already too much traffic for my taste, and I’ve noticed the locals have already begun their diversionary tactics. Works well on north-south travel, but the jockeying for parking downtown has pushed the tension meter.

While patiently waiting for two separate spots, I’ve suffered the agro-aggressor who squealed around the corner and jammed their car into the space before I had a chance to move forward. We should also post parking etiquette signs next to the “pay here” booths. As in, “wait your turn.”

Main Beach looks like — well, there’s hardly a beach, but the way the bodies covered the sand over the weekend, you had to smile. Picnic baskets, umbrellas, tents (are those kosher?) are mixed with beach chairs, beach pong, Frisbee toss, and an ongoing number of volleyball games. The scent of suntan lotion filled the air and everywhere it seemed like folks were smiling. Starbucks was packed and the line at BJ’s Restaurant and Brewhouse wound around to Forest. In fact, all the restaurants had waiting lines — a nice respite from the quiet winter eves. Downtown felt vibrant and alive.

If you were lucky enough to have tickets to the opening of the Sawdust, then you might have actually gone. And then again, you might have gone and given up on getting in. The line snaked way past the old Hop Sings, now LCAD studios, as the gatekeepers dealt with fire marshal mandates on how many folks could actually be inside those festival gates at one time. I watched many give up, turn back and miss the party.

Patience ruled again. Entry was worth the wait. The band filled the upper deck with rocking sounds, the artist booths were festooned for the party, and food and drink were in abundant supply.

I think that the opening parties can be more about looking at each other than looking at the art. My friend Alan calls it the circus. He says you can go to the grounds any other night and have a great time, but the opening — well, it’s just different. The ladies’ outfits for one. Dressed up to kill, or dressed with, well, as little as possible to accent the assets. Even the guys gussied up this year. A few hats, some cool ties. And the normal plethora of Hawaiian shirts. We are for sure a beach town.

Somehow I managed to navigate most of the booths, and made mental notes of art I wanted to come back and look at in more detail. The jewelers are characteristically mobbed opening night, and it’s hard to appreciate the detailed work while jostling for looking space.

I left with a bird. Cherril Doty has a new collection of “Feathered Friends.” While I hadn’t intended on emptying my wallet, one of her creatures, now named Raymond, wouldn’t shut up. He sat on the shelf chattering away, and the only way I could silence him was to promise to take him home. I laid down cash, Cherril stuffed Raymond into a bag, and we almost had quiet. Until his girlfriend, the one with attitude left on the shelf started her own tirade. Don’t ask!

Upcoming this Saturday is the Festival of Arts preview party. I’ve been told the theme is urban grunge. I’d better start plotting an appropriate outfit.

These early days of summer in Laguna are the sweetest. We aren’t exhausted yet by the crowds and the struggle for parking. We haven’t yet wearied of trying to get in or out of town, and we still think that tourists are really cool people.

Come September, we are going to be clamoring for our spaces and a chance to see the sand on the beaches — not just blankets, chairs and bodies. But for the moment, it’s summer, and it sure feels grand.