Migrating with the Whales to Baja

We’re following the whales, the girls and I, south to San Ignacio Lagoon.
After weeks of watching the graceful grays glide past our Southern California coastline, we’ve booked three days at Baja Ecotours outpost in Baja California, on the edge of the lagoon. 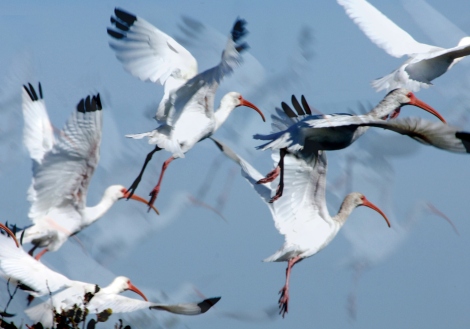 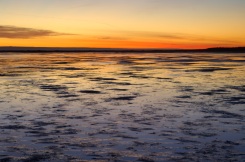 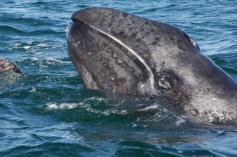 Eye of the Whale

Baby Grey Whale
Laura McCants spearheaded the idea, and I was quick to spread the invitation. Lynn Brown and Eloise Coopersmith enthusiastically joined the party.

When the gray whale was first discovered in the North Pacific, it was called the devilfish. Capt. Charles Scammon discovered their major breeding grounds in the lagoons of Baja California. He and his men furiously hunted the whale, and in turn, the grays killed several men and smashed all of his boats. Because of these actions, the grays were feared by the local population.

It wasn’t until 1977 that the same gray species became responsible for what is now called “the-friendly-whale- phenomenon.” That season, a single gray whale allowed itself to be petted by passengers by all the whale-watching boats it could find.

During successive seasons, the number of petting whales increased, until now. It appears to be learned behavior, and people travel from all parts of the world to be near these gentle giants.

The gray whale has the unique distinction of being the only member of the family Eschrichtiidae, and a mysticete, or a baleen whale. It is a “coastal” whale that migrates from the krill-rich waters of the Artic seas to the birthing grounds in the lagoons of Baja. Their year of travel covers 12,400 miles.

They have streamlined bodies with narrow, tapered heads. The whale received its name from the gray patches and white mottling on its dark skin. Its skin is home to both scattered patches of barnacles and orange whale lice. Newborn calves are dark gray to black, although some may have distinct white markings.

Adult males measure from 45 to 46 feet in length, and females are slightly longer. Both sexes weigh from 30 to 40 tons.
The gray whale has no dorsal (top) fin, but a bump where it would be, and then a series of smaller bumps or “knuckles” that continue along to the tail. Its flippers are paddle-shaped and pointed at the tips; its fluke is about 10-12 feet across, pointed at the tips, and deeply notched in the center.

Gray whales mate in December or January, and a single young is born 13.5 months later — the following January or February. The young travel north with their mothers when they are only 2 months old, and continue nursing until they are 6 to 9 months old. They are generally seen alone or in groups of three.

These whales, which once inhabited both the Atlantic and Pacific oceans, have been close to extinction at least twice in human history, and now live only in the Pacific. Now that they are protected, the gray whale population can continue to recover its numbers.

“Campo Cortez,” the base camp run by Baja Ecotours, was founded in 1989 by Johnny Friday, an avid diver, explorer and filmographer, and Maldo Fischer, a local fisherman and whale watch guide. Both men share a deep affection and respect for the marine world, and their camp provides eco-conscious travelers with an off-the-beaten path experience. His staff consists of local residents who have a lifetime of knowledge of the area and the lagoon, but are also professional boat captains and naturalists. Their focus is on education and a rewarding experience.

Girls gone wild. Well, not too wild. The camp is solar and wind-powered, and lights are out at 9:30 p.m. That means we’ll have the an increased opportunity for star gazing, hundreds of miles away from annoying city lights. Eloise took a deep breath when she discovered she was “camping,” and friends of Laura’s worried she had set off on a life-threatening experience. Reminds me of the naming of the gray whale — devilfish. How much we don’t know and have yet to learn.

This weekend, we will definitely be in the experiential mode. We are hoping for calm seas and many whale encounters, along with leisurely strolls along empty beaches, and exploratory kayaking in the adjacent mangrove lagoons.

And then there is always the thought that some of the whales we see in the lagoon will be the same that we chance to sight on their journey northward. Maybe we’ll get a tail flap as a confirmation.

First Published in the COASTLINE PILOT